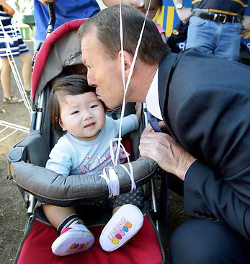 The Prime Minister may soon be the sole supporter of his promised paid parental leave scheme.

Reports have been published saying opposition is coming from within the LNP, the government’s Commission of Audit, and of course – the Opposition.

The plan to offer new mothers six months' paid leave based on their wage, capped at $75,000, will end up costing about $5.5 billion dollars per year.

For the Prime Minister focused on cost cutting and government efficiency, such a “gold-plated” “signature policy” has been seen as excessive.

Fairfax media outlets have this week reported that the Commission of Audit likes the idea, just not the amount.

Claims made by the Australian Financial Review say the commission’s interim report has detailed the broad dislike for the plan among the business community.

Groups including the Business Council of Australia, the Australian Industry Group and the Australian Chamber of Commerce and Industry want the plan scrapped or drastically reduced.

The $75,000-over-6-months cap is significantly higher than the existing limit; 18 weeks’ pay at the minimum wage.

The Prime Minister has stood resolutely behind the plan, saying he wants to “do the right thing by women”.

For the government whose Treasurer has stressed the “unsustainability” of the budgetary situation, an end to middle-class welfare in the “age of entitlement” and restraint in health and education spending – it is difficult to see where the multi-billion-dollar payout fits in.

That confusion has reportedly hit a number of Mr Abbott’s LNP teammates, including backbencher George Christensen.

“I do share some concerns on the costly side,” Mr Christensen said this week

“[But] I really think we need to be ensuring there's something in place that would help stay-at-home mothers.”

NSW Nationals Senator John Williams has been even more outspoken, openly threatening to vote against the legislation.

“I’ve said all along, I don’t have a problem with the paid parental leave that is our policy as long as the economy is strong, but I do have concerns about the strength of the Australian economy,” he said.

Liberal senator Ian Macdonald has said a number of people have come to him to complain about the scheme, and he is waiting to find out more.

“We all supported the leader up to the election. It was the policy which I defended and promoted during the campaign, knowing that when it was introduced we would see the fine detail,” Senator MacDonald said.

“It was always my view that it would be somewhat different to what had been spoken of in broad terms.

“There was no detail in what he was actually proposing,” he said.

Several unnamed MPs in both Fairfax and ABC articles have said they hope the commission of audit's recommendations will steer the plan in a more reasonable direction.

They also say a Productivity Commission review into child care, due in October, may see the plan amended to include improved access to child care.