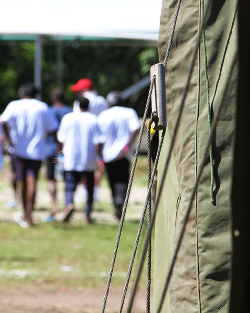 A new company will soon take over a large range of operations at Australia’s offshore detention centres, with the tragedy of recent violence still echoing around the country.

Construction, maintainence and logistics firm Transfield Services will be paid $1.22 billion by the Australian government to run both the Manus Island and Nauru offshore detention centres. The contract includes transport and logistics, building and maintenance, daily operations, detainee welfare and security responsibilities.

Transfield will run welfare services after the Federal Government chose not to renew the Salvation Army's contract.

The company had previously been in charge of services at the Nauru centre, but will now relieve previous security contractor G4S from its duties on Manus Island.

Transfield has strong links with the Australian government - its former chairman Tony Shepherd has been picked to head the Commission of Audit, it won a $134 million contract for safety inspections after the aborted ‘pink batts’ insulation scheme, and continues to hold numerous government contracts primarily from the Department of Defence for building, construction and repair services.

The change from G4S to Transfield is not a direct result of recent riots which left one 23-year-old asylum seeker dead, and prompted a subsequent investigation into claims that armed locals were allowed to enter and violently engage with detainees.

The transition between G4S and Transfield has been occurring for some time, and when the hand-over is complete the company has confirmed it will continue to hire a number of local workers to run security. Transfield traditionally sub-contracts its security work to Victorian company Wilson Security.