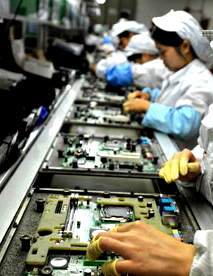 A Chinese court has ruled in favour of workers who were fired for going on strike, and incredible move for the nation’s labour laws.

Chinese media are calling it a possible revolution in workers’ rights, after the first arbitration decision in favour of workers in China.

An arbitration commission has ordered the reinstatement of 40 workers from CoActive Technologies Xiamen Company, who went on strike after the company announced plans to relocate.

The industrial action included a 16-day strike to protest the compensation package offered, which the company said breached it policies.

But the provincial labour commission has ruled that the workers did nothing illegal and ordered CoActive to pay them compensation.

“Although it's certainly commendable that the courts are not allowing companies to sack workers with impunity any more there are still some hurdles to overcome,” he said.

Figures show a sharp increase in strikes since 2011, up from about 10 per month to more than 100 in March this year alone.

“I think workers are much more confident in their ability to take collective action and I think there's a lot more at stake here,” he said.

“There have been a lot of factory closures, a lot of mergers acquisitions and this has made workers nervous about their future.”

But he says there is no concerted effort just yet.

“The government is responding on a case-by-case basis, it doesn't really have a strategic game plan.”