Screws turned on interns as experts check the law


The Fair Work Ombudsman is investigating the laws around unpaid internships, amid claims that some interns experience abuse and exploitation just to get their foot in the door.

As Australia's youth unemployment rate hits 20 per cent, more and more young job-seekers are looking to internships as their first step on the career path.

But workplace law experts say there is an alarming number of students and graduates taking up unpaid internships, some even paying to do them, and they may be getting ripped-off.

There is a very fine line between experience and exploitation, it seems.

Experts say that the nature and extent of the training that comes with the internship must be worthwhile, especially for those internship agencies that place students and graduates in the hospitality, service, or education industries and charge a fee to do so.

“From a moral standpoint, I don't want to condemn any individual job seeker who makes that decision," Adelaide University workplace law expert Andrew Stewart, who is working with the Fair Work Ombudsmen review, told the ABC. 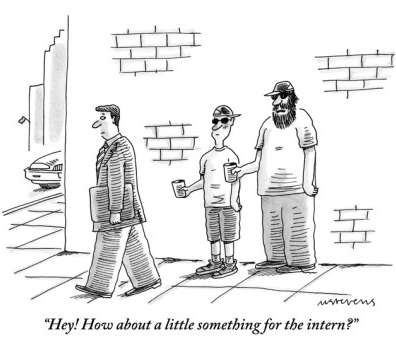 “It's very often a rational decision to take unpaid work to get a contact, get a foot in the door, but it's the overall effect.

“It would be the same if we said; ‘well, it's okay if you agree to take less than the minimum wage’.

“Some of the positions that we came across in our research, and which the Fair Work Ombudsman has become very concerned about, really do involve people doing unpaid work experience in a way that's undistinguishable from being an employee.

“What a lot of international students find, if they want to stay in Australia and work here, is to get the points up to qualify for permanent residency they need to satisfy certain work requirements.

“Amazing as it sounds unpaid work experience can count towards that.

“It’s certainly linked with migration requirements, but it's not exclusive for international students ... or residency seekers by any means... [so] is it an employment scheme? Well, that's where we get into the very murky area of the legality of unpaid internships.

“When the Fair Work Ombudsman found out, they contacted the company, which agreed it was the wrong thing to do, and agreed to pay the real estate agents what they should have received under the relevant award.”

Australian unions have called for a code of practice specifically covering internships.

They say young people must be protected from exploitation in the form of unpaid work.

Recent reports have claimed that the Australian Internships company charges over $2,000 to secure some internship placements.

Unions say there must be tighter regulation to stop the misuse of young skills.