Strike starts over places and pay at UWA 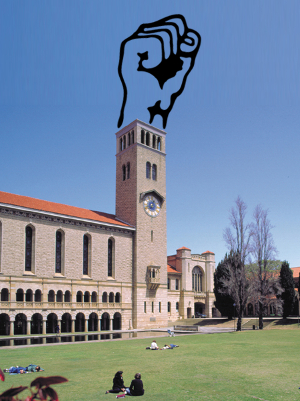 Some staff at the University of Western Australia will take industrial action to escalate an ongoing pay dispute.

A group of workers at the university voted to take action this week and have imposed a ban on overtime and time-off-in-lieu.

There will also be a ‘silent protest’ at the Perth Writers Festival over the weekend, though staff say they will be using the festival to raise awareness of their concerns in an less-than-silent way.

The members of the teaching and research staff want a 4 per cent pay rise over 4 years to combat a jump in student numbers at the university from 17,000 to 25,000 since 2007.

Reports say staff numbers have dropped over the same period.

Around 650 people are members of the National Tertiary Education Union, from about 4250 full-time equivalent positions at UWA.

The NTEU says that even with a minority of staff involved in the industrial action, heavy workloads mean the effects will be felt.

The union says UWA has offered a 3 per cent pay rise over 4 years but given UWA’s rising world ranking and workloads they believe that is insufficient.

“[There will be] bans on overtime and TOIL, and then gradually will escalate through the coming weeks as the new semester starts to things that will influence enrolment of students,” he said.

“Ultimately there'll be withdrawal of classes etcetera, so, strike.”

A spokesperson for UWA said the offer on the table was about as good as it would get.

“The 3 per cent offer is an offer that is affordable as the University, and the sector more broadly,” he said.

“[It] works to respond to the recent Federal budget cuts worth billions of dollars.

“It is worth noting that many of our Go8 counterparts, including Melbourne, Monash and Sydney, have recently settled their agreements at 3 per cent per annum.”