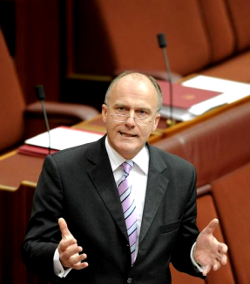 Media stirrings indicate industrial relations changes are imminent, and that new legislation will be announced soon.

Federal Employment Minister Eric Abetz is expected to unveil new conditions for workplaces in the next few days, which will likely be aimed at breaking down union control and influence across a range of industries.

The public sector will not be spared by the potential onslaught of union reform.

The Coalition government’s dissatisfaction is evident in the recent announcement of a Royal Commission into union corruption, and many believe the new laws will reflect more of the same ideals.

Changes were announced in Queensland this week, where the state government often pre-empts moves on a federal level.

New Queensland industrial relations laws have meant that union officials must give 24-hours notice before investigating safely issues, among other changes.

Getting less press is the plight of public servants, for whom more than one hundred bargaining agreements will expire in the coming months.

With new bargaining arrangements about to be made, many are filled with scepticism as to how workplace changes may play a part.

The national secretary of the Community and Public Sector Union, Nadine Flood, says the body that represent public servants will be one of the unions targeted by Coalition re-working.

She says conditions may be traded for wages.

“What we're being told is the Federal Government's policy is proposing wage rises of zero to 2.5 per cent but the only way to get a pay rise is to have your rights and entitlements cut,” Ms Flood said

“So despite savings measures and job losses in the public sector that mean people are working harder than ever, you've got to get a cut as well on your conditions to get a pay rise.”

The ‘divide and conquer’ approach of having more individual contracts has been flagged as well.

Some workers may be cut by both sides of the double-edged sword - having their wages frozen and conditions reduced.

“What we are seeing is attacks on personal and carers leave which is obviously significant in the public service. We've got a lot of working mums in these areas,” Ms Flood said.

“This government seems more interested in having a political go at workers and unions than actually making fair and sensible workplace agreements.

“I mean does the community really want their local Centrelink office or customs checkpoint to become the next battleground?”

Employment Minister Eric Abetz said through a spokesperson that the Government has not yet issued policy guidelines for the bargaining process, and so it is premature to speculate.

Minister Abetz has indicated he wishes to end the “strike first, talk later” culture in some industries, possibly creating a mandate that parties must show they have discuss productivity improvements before taking industrial action.