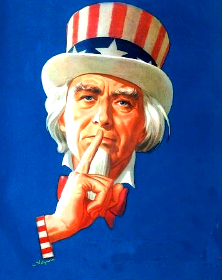 Public servants have seized a chance to slam their lack of free speech.

Government workers say they have been effectively gagged on Twitter, Facebook and other platforms, making a number of submissions to a review of the rules for federal bureaucrats' online behaviour.

The Public Service Commission is going back over its advice to public servants, after complaints of confusion about exactly what type of public comments are acceptable.

Workers have eagerly vented their frustration.

“Enough with the fear tactics.”

“The current social media requirements for APS staff are intrusive and compromise the implied right to political communication we have as Australians,” she wrote.

“We currently have a situation where APS employees are afraid to even 'like' a news article that is mildly critical of any policy, due to the vagueness of the social media guidance provided."

“I understand that it is important to ensure the impartiality of the public service, but the trade-off in terms of reduced participation of Australians in civic life is too great from a draconian social media policy,” he wrote.

“There is no clarity at all, I am muzzled,” Bargo wrote.

“I can't say anything to criticise govt policy because who knows how that will be perceived (now or in the future)?

“If the policy has no relationship to my dept, I should be able to say what I want (I understand it is not always clear cut).”

But there was some support for the silence.

“I agree it is an honour and privilege to serve by being a public servant,” she wrote.

“We need to be just as respectful, whether you hold a different opinion or view to the government of the day.

“We need to ensure we do not create doubt in the public's mind of our ability to serve impartially.

“To protect public servants from any erosion of trust now or in the future, I believe they should not be posting anything critical.”